Moscow is famous as one of the greenest capitals in the world, with over 100 parks within the city limits, not to mention countless gardens, boulevards and squares. And it’s not just the number of green areas in the city, it’s their incredible variety and cultural life that makes Moscow parklife so interesting.

Expressly omitting the Hermitage Garden and the Boulevard Ring in the very center of the city, allowing one to have a peaceful stroll any time, OUDAGAN offers you the TOP-10 of Moscow parks to visit if you are in Moscow this summer.

1. The Central Park of Rest and Culture Named After M. Gorky, to give it its full name, is one of the most famous places in Moscow. Laid out in 1928, this was the first park of its kind, and the prototype for hundreds of others across the Soviet Union. 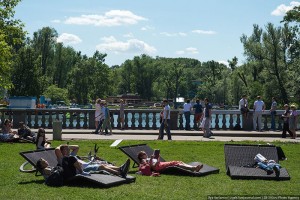 The park stretches along the banks of the Moscow River. In summer the “beach” area is hugely popular with sun-worshippers, and becomes an open air club in the evenings.  In winter a huge area becomes a vast skating rink with skate hire, disco lights and music to match.

Gorky Park is the place to come if you want to join Muscovites on their free time.

2. VDNKh – the Exhibition of National Economic Achievements – is a fascinating monument to Russia’s transitional period, a mixture of Soviet pomp and capitalism. It began life in 1939 as the All-Union Agricultural Exhibition, a monumental paean to the achievements of collectivization epitomized by the famous statue Worker and Collective Farm Girl by renowned Soviet sculptor Vera Mukhina. The exhibition was housed in 250 buildings spread over 136 hectares, and attracted 4.5 million visitors in 1940 alone; 3,000 guides were employed to take care of them. 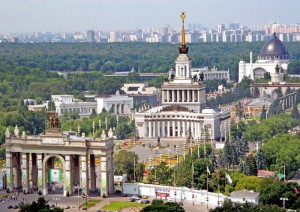 The VDNKh is truly unique, and well worth a visit, especially as there is plenty more to be seen nearby, including the wonderful Cosmonautics Museum, the Ostankino TV Tower, and the very different delights of the Ostankino Park and Estate (currently being renovated). You can take some free photography and chess lessons.

3. Kolomenskoe is one of the most beautiful places in all of Moscow. Only a short metro ride from the center, the park and its awe-inspiring buildings are so steeped in history that not even the Kremlin itself can quite so well evoke the Russia of old. The Museum of Wooden Architecture with Peter the Great’s little house from Arkhangelsk, the XVI century stone Church of the Ascension of the Lord and the pretty Church of the Icon of Our Lady of Kazan, there are plenty of things to see here. 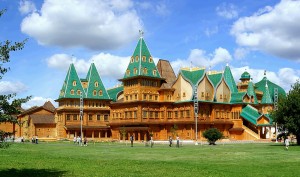 In summer, Kolomenskoe is one of the most popular places for Muscovites to come and soak up the sun, although there’s more than enough space in the park to find tranquility and solitude. In winter the park is perhaps even more impressive, when there are far fewer visitors and the ancient buildings seem to have been left to the crows and the snow. Whatever time of year you come to Moscow, Kolomenskoe should definitely be on your itinerary. 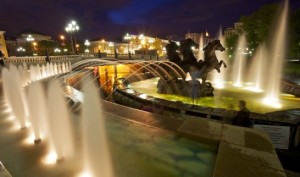 The capital’s most central park runs along the Kremlin’s western walls and is directly accessible from the metro station bearing the same name. Picturesque gardens with shady trees and broad lanes were designed and set up in 1821 by O. Bove, one of the chief architects of Moscow, who reconstructed the city after the Great Fire of 1812. First called the Kremlin Gardens, they changed the name in 1856 after the crowning of Alexander II. On the central square of the gardens you can see the “Ruines” grotto, a peculiar memorial of the revival of Moscow after the devastation in 1812. It contains the Grave of the Unknown Soldier and the Eternal Flame, where you can watch the hourly changing of the guards.

5. Victory Park was only completed in the mid-nineties, and is something of a last gasp for the Soviet tradition of monumental triumphal art. Located on and around the Poklonnaya Gora – the hill where Napoleon waited in vain to be given the keys to the city when his troops were surrounding Moscow in 1812 – the park is set in an area steeped in Russian military history. 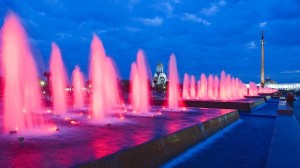 Victory Park has five terraces, symbolizing the five years of Russian participation in the World War II, and there are 255 fountains – one for every week.

The park is lovely and you can rent bycicles, velomobiles, roller skates, electric cars, segways or scooters. From June, 1st there are free yoga lessons, mats are provided. 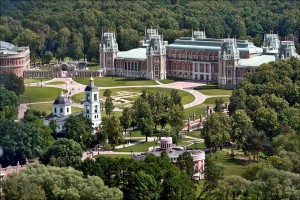 The name of this estate and park comes from the Russian word “tsar” and means “Tsaritsa’s”. It is home to the romantic summer palace that Ekaterina II (Catherine the Great) ordered in 1775 but the works continued until 2007. Its trees overlook the waters of the Upper Tsaritsyno pond, which together with the Shipilovsky and Borisovsky ponds form the largest cascade of ponds in Moscow. Tsaritsyno is the largest museum-reserve and historical and cultural monument of the federal level in Moscow, occupying over 700 hectares. A tremendously rich complex of architectural objects is gathered here – the historic village sites, plowed fields, barrows dated from the VI thousand years B.C. to the beginning of the XII century. In september 2015 Tsaritsyno hosts the international Usadba Jazz Festival, the biggest Russian open-air festival that has joint jazz, funk, world music, acid-jazz, lounge, jazz-rock, blues and other directions of contemporary improvised music. 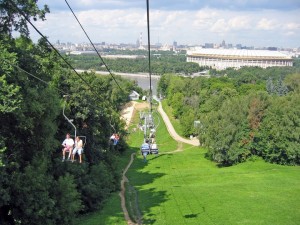 Located adjacent to Moscow State University (MGU), this area is great for walking and rollerblading in the summer with a magnificent view of the city from the platform across from the University. Birds have nothing to do with the name: in the 15th century one noble lady bought a village here from a priest called Vorobey. Vorobey’s name has outlived the glory of the Great Soviet leader Lenin, whose name this hill wore in the Soviet times. In front of the facade of MGU facing the Moscow-river there is a big square and a lovely alley decorated with busts of famous Russian scientists. The alley leads to the best observation point of the city. Many newlyweds will visit this famous place after their official wedding ceremony. In winter you can also observe snow-boarders and alpine skiers on the hill underneath. Souvenir vendors are always on the platform. 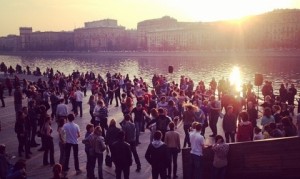 Founded in 1993 as an open-air sculpture museum, it is now one the most bustling artistic and cultural spaces in Moscow. As for the museum you will find many Soviet-era monuments that were removed from their pedestals in Moscow’s squares and parks after 1991, including the controversial statute of the Soviet Union’s first KGB chief Felix Dzerzhinsky that used to stand right in the middle of Lubyanskaya Ploshchad in the city center.

You can take some free yoga or dance lessons, there are also an open air cinema and culture/art lectures and think-tanks. The park is located next to the Central House of Artists, across the road from Gorky Park.

9. If you happen to be in Moscow, and especially if you are in Russia for the first time, don’t miss the chance of visiting Izmailovo with its Russian souvenir market called Vernisazh, Kremlin and park. The history of the village of Izmailovo can be traced back to the 14th century, when it would have stood at the edge of a dense forest stretching east for many miles. It probably took its name from the boyar Izmailov family, who owned the village at the time. 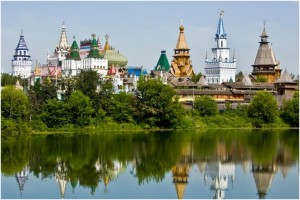 Much of Izmailovsky Park has retained its original beauty. Apart from the glorious birch woods, the main attraction of the park is the beautiful Pokhorovoskiy Cathedral on Silver Island, which was completed in 1679. Although badly damaged during Napoleon’s 1812 invasion, the cathedral was restored by the great Moscow architect Konstantin Ton in 1840. He also supervised the construction of the buildings which now surround the cathedral, originally designed as a military hospital. Two more buildings from the original estate, the Ceremonial Gate and the Bridge Tower, lie in front of and behind the cathedral respectively. 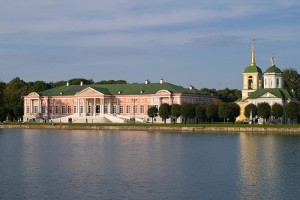 Once a village to the south-east of Moscow, it was razed to the ground during the Polish invasion of 1611, and was used as a hunting reserve until Count Boris Sheremetev, one of Peter the Great’s leading generals, decided to build a summer home here. Magnificent architectural monuments, original interiors, a beautiful park and a unique collection of ceramics and glass will create unforgettable impressions, immersing you into the world of an old Russian estate. During the summer the Palace Dance Hall hosts numerous concerts and musical festivals.

There are so many places and events in Moscow that it can be hard to choose. We keep an eye for you on everything happening in the Russian capital. Do no hesitate to contact us for a piece of advice or a tailor made itinerary. 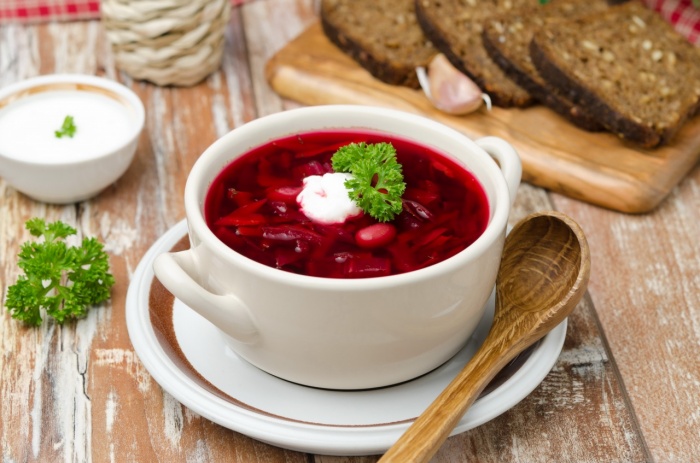